A Fine Press in Kirkwood, Missouri

(Clicking on thumbnail images below will display a full-size image.)

Two Tracts: Information to Those Who Would Remove to America and Remarks Concerning the Savages of North America 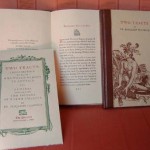 Pictured to the left are the prospectus (which reproduces the title page), the opening page, and the front cover. (More photos below)

With the publication of Crevecoeur’s Letters from an American Farmer in 1782 and American Independence in 1783, the interest in immigration to America increased dramatically. In 1784 Franklin wrote:

“I am pestered continually with Numbers of Letters from People in different parts of Europe . . . who manifest very extravagant Expectations, such as I can by no means encourage; and who appear otherwise to be very improper Persons. I have just printed some Copies of the enclosed little Piece . . . to send hereafter in Answer to such Letters.”

As America’s envoy, Franklin set up a small printing office at Passy that grew into a full-blown diplomatic press. He printed Information to Those Who Would Remove to America and Remarks Concerning the Savages of North America in both French and English. These engaging and thought provoking essays were printed together in London in 1784 as Two Tracts. Subsequent editions soon appeared in Dublin, France, Italy, and Germany.

The London edition of Two Tracts was set in Caslon types as is this new edition. Stephenson-Blake promoted this Caslon as being “cast entirely from matrices produced from punches engraved in the eighteenth century by William Caslon.”

From Gutenberg’s time until the end of the eighteenth century, printers followed the manuscript convention of employing a long ‘s’ initially and medially in a word and using the short ‘s’ terminally. This new edition of Two Tracts is taken directly from the 1784 London edition. The same Caslon types are handset. The long ‘s’ with all its ligatures, the capping scheme, the catch-words, and the signature indicators are all retained, allowing the modern reader the opportunity to enjoy these widely circulated Tracts in their original eighteenth-century attire. 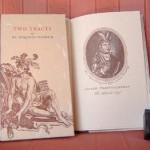 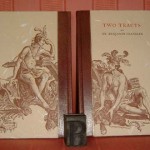 Pictured above left is the front cover and the engraving of Chief Joseph Thayendaneken, the Mohawk Chief. The right hand picture is the back and front covers.