A Fine Press in Kirkwood, Missouri

(Clicking on thumbnail images below will display a full-size image.)

By a Vote of Congress

In 1976, in honor of the bicentennial of the founding of our country, The Printery produced 145 copies of By a Vote of Congress, and set aside a few copies for future use. In the intervening years, memory being what it is, and as a result of three moves, the existence of these books was forgotten. And now,The Printery has discovered 20 remaining books.

The book revolves around a John Adams letter, written June 18, 1775, to Elbridge Gerry, in which Adams explains “that the sum of two Million Dollars (will) be issued in Bills of Credit” and “that fifteen Thousand Men shall be supported at the Expense of the Continent.” Adams continues about the arrival of these troops in Boston “The Utmost Politeness and Respect will be shown to these officers . . . and all the Pride, Pomp, and Circumstance of Glorious War displayed – no Powder burn’d however –” As a final note Adams observes “There is something charming to me in the conduct of Washington” and then Adams goes on to explain. 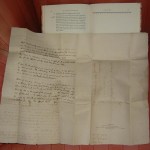 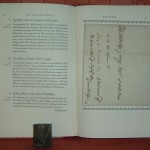 A facsimile of Adams’ rather large and lengthy letter (right) is folded and tipped into the book (left). It was reproduced from the original letter in the George N. Meissner Collection at Washington University, through the courtesy of Holly Hall, who was then the Rare Book and Manuscript Curator. Holly also wrote the introduction. Randolph K. Tibbits, Rare Book and Manuscript Assistant at Washington University, wrote an account of the events leading to the writing of the letter. 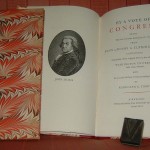 The book is handset in Stephenson-Blake’s Caslon types that were cast from matrices made from the original punches cut by William Caslon in the early eighteenth century. A sprinkling of period printer’s ornaments adds spice to the mix. Printed in two colors on dampened Arches laid throughout, the book is illustrated with a frontispiece of John Adams from a period engraving based on a painting by John Singleton Copley (pictured at left). Also included are reproductions of an original two pence newspaper stamp tax (below left), Franklin’s now famous “Join or Die” political cartoon, and the four coffins device (below, right) that identifies the victims of the Boston Massacre. It is quarter-bound with English Cockerell marbled paper sides and gold stamping on the spine. The original press run was limited to 145 copies. 6-1/2 x 10 inches. 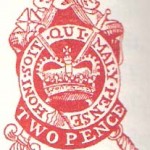 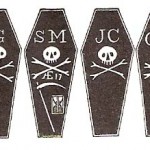 The Printery offers these 40-plus-year-old books in very good condition for $250.00. As of this posting, we have fewer than a half dozen copies left, and each has a minor binding anomaly. As always, if you are not pleased with your purchase from us, we will gladly refund your cost if it is returned to us within ten days in the condition in which it was purchased. If you are interested in purchasing a copy or have any questions, please feel free to contact us.